It's been a super Sunday!

If you join me on a regular, or even semi-regular, basis, you know that I haven't felt like crafting because of the heat.  Well, the dry spell has been broken and yesterday I made two cards for a swap at SCS.  This swap is being hosted by Viv (blusky) and there must be a winged creature on the card.  I committed to one spot, but in my craftiness, created two.

And, you get the sneakie peekies at them. 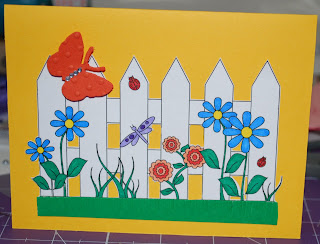 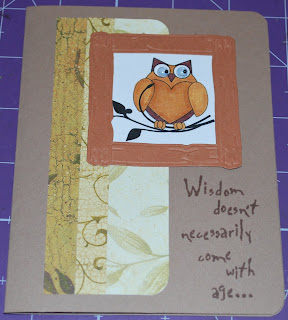 Deets:
The fence is a digital image by GTC and called Floral Fantasy Fence.  I used Bic Mark-Its to color it in, trimmed between the fence posts and added a die cut, embossed butterfly that has a few rhinestones to embellish it.
On the second card, the owl is a digital image from TlcCreations.  He is also colored with my Bic's.  The sentiment is by Close To My Heart and the inside of the card reads "Sometimes age just shows up all on by itself."  I think the googly eyes really give Mr. Owl more personality!
Thanks for checking in today.  I have posts lined up for later in the week, so be sure to check back!!
Huggz,
April
Posted by April at 8:46 PM

LOVE the sentiment on the owl card...too funny! Great cards!

Both cards are adorable! Have a great day!

These are both adorable....I really like that little picket fence!

Both cards are so cute! Love the white picket fence.

Cute cards April. I love the sentiment on the owl card. The picket fence card is adorable.

Cute cards, April. I like the CB folder you used on the owl card. Perfect!